As a breeder, there are always obstacles and difficulties in raising any litter of puppies. A fellow breeder once commented to me that Mastiff puppies are born with a death wish--that at times no matter how hard one works to raise them that some are going to be lost. Any Vet will tell you that a 30% death rate in a litter is AVERAGE. As a breeder, I find that totally unacceptable--so I work hard to raise every puppy we whelp.

For the first 3 weeks , breeders work to keep their puppies fed and warm. Their eyes open, and soon it's time to begin soft food. We allow ourselves a sigh of relief; we can feel a sense of relief for our first big hurtle is over. Then overnight, the puppies begin to lose weight; they don't eat or even nurse, and then they begin to die. One by one they simple "fade away" and Fail to thrive.

Often a vet can find no active disease or health reason for puppies to Fade. A very over looked possible cause is Canine viral herpes. For a breeder, it's an unbelievable nightmare. Often by the time the diagnosis is made, all the puppies have died or become too sick to survive. CVH shuts down the immunity system of the puppies allowing secondary infections to set up and often it;s theses secondary infections that kill the puppies. The puppies fail to respond to routine treatment; they present with symptoms similar to distemper or Parvo but will test negative.

Canine Viral herpes often is brought into a breeders home by a visiting dog or even your own dog who has been to a show or boarded at a kennel. One may even may contract the virus at doggy day care or the dog park. It's usually not a life threatening illness in an adult dog; a healthy dog will have a runny nose and mattered eyes for a few days. A Owner may attribute these symptoms to seasonal allergies or even a "cold." Without any special care the dog gets better in about a week. However during this time, it can infect every dog it comes in contact.

When this virus is introduced shortly after you have bred a bitch (the first 3 weeks), she will absorb her puppies. If introduced in the second 3 weeks (week 4 to 6 of her pregnancy), she will abort or prematurely deliver stillborn puppies. A bitch exposed in her last 3 weeks of pregnancy may deliver her puppies, but they will be undersized, weak, and often exhibiting poor ability to nurse. A breeder may become frustrated at the overall poor quality of these puppies. After a few days, they begin to die off one at a time, and a Vet may attribute it to "fading Puppy syndrome."

We can expose our dogs unintentionally to this virus and bring a breeder's worst nightmare into our homes. To make this lost all the more potent; in Europe there is a vaccine approved and in use to prevent CVH; however, it is unavailable to Vets and dog owners here in the United States. Two simple vaccinations given to your brood bitch can eliminate and prevent this disease from occurring. However according to sources at Merial ( the company who produces the Vaccine in Europe), FDA approval in the US may never occur because this vaccine will not "fit" the USDA requirements for Titer rise.

In July of 2007, I experienced CHV in my two Mastiff litters. Nothing the vet or we did could save 9 of the 10 puppies from the first litter. As I was reeling from the loss of these beautiful babies, my second litter at age 6 weeks began to show the same symptoms. Within 49 hours, I lost my only male from my second litter. It was at this point, I put out a plea to my fellow Mastiff owners via the Internet for help and input from anyone who had experienced the same problem with a litter.

It was through networking, with the Mastiff community and the input various breeders gave me that I began to develop a treatment plan. The virus had completes destroyed my puppies' immunity system leaving them open to any and all infections. I began my puppies on a combination of Clavamox and Metronidozole antibiotics, subcutaneous IV fluids ( Normal Saline and Lactated Ringer's) to prevent dehydration, Kayro syrup to maintain blood sugar, and Pro Biotics paste to help correct and re-establish intestinal Flora, and serum injection from one of my older dogs.

Research on the Internet lead me to try a very controversial treatment to save my puppies-the use of serum from one of my older bitches. A previous study done in England had shown that by giving puppies the serum of an older dog, a passive immunity could be passed onto the puppies. One should pick an older dog who is healthy with an intact immune system, whom has had an exposure to other dogs ( a retired show dog is an excellent example), and one who has possibly already been exposed and has developed an immunity to CVH.

CVH is a ubiquitous virus and is part of the kennel cough complex--it is extremely common, so trying to prevent it's spread between adult dogs is pointless. Transmission occurs through direct contact--simple nosing, licking, sniffing, drinking water from a common container, etc--and may also be passed through sexual contact. The ability of an infected dog to maintain antibodies is variable--some infected dogs after a few months show no antibodies and others will have an antibody level persisting for many years. An active infection will cause a four-fold ride in antibody levels within a 10-14 day period. So the highest titers will be in dogs exposed within a 3-4 week period.

I had an older bitch who fit this bill, Vidalia. She was exposed at about the same time as my litter dams, had showed a few minor symptoms but had been fully recovered for several weeks. My rationale was that she would have the highest level of antibodies to this virus. As a previous show dog--she may have also been exposed to the CVH on an earlier occassions and a re-exposure would have cause an additional rise in her titer. Thank Good, my vet was willing to try this approach, for it worked.

I began the serum injections and saved one of Boudi's puppies--my Gidget. I lost the male from Mona's litter, but save all 4 of the girls with 3 of them never getting ill. Hope was the sickest, but turned the corner in five days , began to improve and is now growing normally. (P.S. Hope completed her AKC Championship at 1 year and 15 days and is maturing into a very lovoely, completely normal bitch. Sister Gracie has also almost completed her AKC Championship annd is completely normal. Gidget is on the small side, but completely normal.)

It's an experience I hope never to repeat. Ironically, if I had been in Europe, two simple vaccinations for each of my girls would have saved all their puppies. We need this vaccination here in the United States, but due to red tape and years of paperwork via the FDA and USDA we may not see it here for another 10 years.

If the commerical breeding kennels began having a mass outbreak of CHV in their breeding facilities, I bet we would have approval of this vaccine within a few months instead of years. Money talks and the average hobby/show breeder does not produce enough "business" for the vaccine companies to make money. What ever happened to helping others? We need a researcher for canines much like Jonas Salk was for the children of the world.

I do have my "miracle Babies"--Grace, Hope, and Gidget. Go to their blogs and see my wonderful, loving babies.
Posted by Cathy (Catie) Arney Kiokee Mastiffs at 12:46 PM

Cathy (Catie) Arney Kiokee Mastiffs
Hickory, North Carolina
We have been involved in the ownership, breeding, raising and showing of Mastiffs since 1984. It is our love for this breed that keeps us motivated and involved. We consider dog ownership a privledge and dedicate our efforts to maintaining the hobby breeder as the "gatekeeper" for our breed. 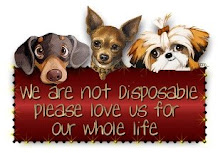 Look in our blog topics for more information